This copy is in nearly as-if-new condition. It was issued in a striking original art deco binding, gold embossed lettering and a lovely silver coffee pot, salt and pepper and covered dish against a red background. (Later printings weren’t quite as attractive, because the coffee pot and dishes weren’t silver and their background wasn’t red. The embossed area was all solid navy blue.) The cover is exquisitely and intricately embossed dark navy blue leather. There’s minor shelf wear on the cover, especially on thr spine cover.The binding is perfect. The hinges are perfect. And each and every page is completely clean. No one on the ever used this cookbook. 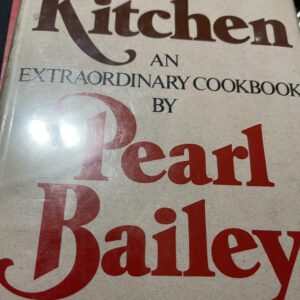